How to choose reusable nappies - what's best for you

Here are some more things to consider.....

The most effective nappies in terms of containment are two-part nappies (also called fitted nappies) that have a separate wrap - two sets of elastics make them pretty bomb-proof. But they are a bit bulky and generally not as attractive as a pocket or all-in-one nappy.  They are excellent for bedtime.

Bamboo nappies are more absorbent than microfibre ones but take longer to dry. Microfibre is very quick to dry but also quick to get soaked though.  Microfibre acts like a sponge while bamboo or cotton acts more like a towel - so microfibre absorbs loads but the wee is easily squeezed out by an active baby or a tight buggy strap.  (This is called "compression leaks").  Hemp is extremely absorbent and also extremely slow to dry.

Pocket nappies or all-in-two nappies are a good compromise between absorbency and drying time for general daytime use, if they have bamboo inserts. The sort of pocket nappies that have 2 extra rows of elastic inside give much better poo containment than the ones that are plain inside.  Bamboo two-part nappies are brilliant but take ages to dry.

Flat nappies - either prefolds or terry squares - are the cheapest options. Prefolds are not very good at containment so you may have poo-nami issues. Terry squares work much better but are more of a faff and do look quite bulky.  Terry nappies make a good cheap night-time option when appearance doesn't matter so much.

LittleLambs make some very reasonably priced "one size fit most" pocket nappies and sized two-part nappies (in bamboo, microfibre or cotton) and wraps. These are made in Turkey using Oekotex fabrics.  There are also some amazingly cheap Chinese imports available on ebay but you don't know anything about the conditions in which they were made - the inserts are sometimes sold separately so they may not be as cheap as they seem at first glance.  Avoid microfibre inserts.  A second-hand nappy from a reliable manufacturer may be a better budget option.

Pocket nappies or all-in-two nappiesare generally the most slim-fitting and come in some really great colours and fun patterns, but they are not always the most absorbent. TotsBots Easyfit Star all-in-one nappies are very trim. Two-part nappies and traditional terry squares with separate wraps give the classic "big bum" look, which is really cute!

Microfibre is quickest to dry, then cotton, then bamboo, then hemp. Generally speaking, the more absorbent a nappy is, the longer it takes to dry.  Beware of any nappy that boasts many layers of absorbent fabric - it'll take forever to dry in our damp British climate.  Pocket nappies and all-in-two nappies are better for drying because the inserts are quite thin when unfolded or separated out - it's better to use several thinner inserts (or inserts that fold) rather than one big fat insert.  Fitted nappies are especially slow to dry because of the elastic which traps the wetness.  All-in-one nappies, where the absorbent inner part is permanently attached to the waterproof outer, can be the worse because it's hard to get good air circulation to all parts of the nappy - beware especially of all-in-one nappies where the absorbent part is completely attached , on all sides, to the cover - they'll be impossible to dry unless you live in Australia.  Old-fashioned flat nappies are very quick to dry considering how absorbent they are, since they unfold to a single layer of fabric.

A lot of childminders and daycare staff would struggle with flat nappies, especially terry squares. They have no problem with any of the other sorts if they are all set up ready to use, with pockets stuffed and size appropriately adjusted.

All-in-one nappies may not wear well enough to do more than one child. The waterproofing and elastics may deteriorate with age and then they're useless. If the waterproofing and elastics wear out on pocket nappies, at least you still have the inserts to use as extra boosters on new nappies. Two-part nappies and flat nappies go on forever, though you will have to buy new wraps occasionally - that's why they are so often offered for sale second-hand. A two-part nappy with failed elastic is still useable with a new wrap.

When you have finished with nappies, old terry squares and prefolds make great cleaning cloths!

The most popular nappies in The Nappy Shed's trial kits are Baba+Boo pocket nappies.  They're very absorbent, easy to wash and quick to dry, and give great containment thanks to the extra row of elastics inside. 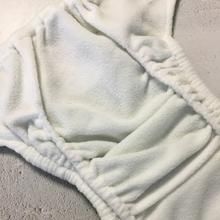