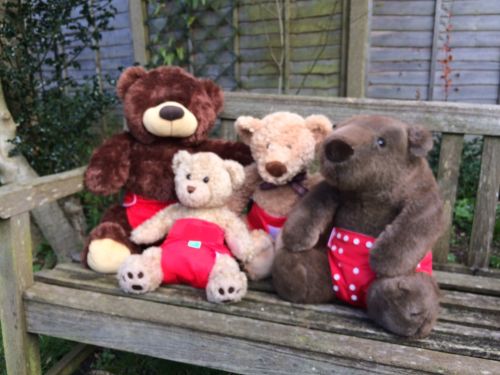 The most environmentally friendly way to buy nappies is to buy preloved, second-hand or nearly-new nappies.  If you buy nappies that someone else bought, but didn't use much, you may get yourself some fabulous nappies at a fraction of the normal price - and save those nappies from being unnecessarily thrown away. The most effective use of natural resources is to use cloth nappies until they are completely worn out.  Second-hand nappies can be bought from Gumtree or Preloved.co.uk and sites like www.usednappies.co.uk and www.clothnappytree.com.  You're not allowed to sell used nappies on Ebay, but people do. They list them as new nappies and then they just add the fact that they're used to the description. There are various nappy buying and selling groups on Facebook including The Nappy Lady Buying & Selling Group, and groups dedicated to particular brands of nappies.

BUT  buying used nappies is not always straightforward!  It can be hard to know if you're really getting a bargain.  Second-hand nappies are sometimes the old version of a nappy; previous models can be quite different and not always as good as current versions.  Whilst some nappy manufacturers don't change the style and fabrics of their nappies very much or very often, other manufacturers are always tweeking their designs. The sellers of used nappies are not always completely honest and may describe the nappies they're selling as being new and unused and the current model whereas they are in reality newish and hardly used, but have been sat in the cupboard for 5 years!

The part of a cloth nappy that wears out first is usually the wrap or waterproof cover - it may stop being waterproof, leak along the stitching round the legs or even completely delaminate.  The next bit to wear out is the elastic and this may go saggy even if the nappies haven't been used, but have just been sat in a hot attic or damp garage for a few years.  The cloth part of a nappy goes on forever.  For this reason, I wouldn't really recommend buying second-hand wraps or all-in-one nappies, unless you've seen them and checked they are still waterproof and the elastics are still stretchy, or if they're really cheap.  If you buy used pocket nappies, and the outer part proves to be useless, at least the inserts are still good to go and you won't have wasted all your money.  Two-part nappies should be fine second-hand - even if the elastics are a bit perished they will still work fine with a decent wrap on top.

Another thing to consider is the state of the fastenings on hook-and-loop (aka Aplix or Velcro) nappies.  These can get very fluffed up and then they won't stay closed.  It may be possible to remedy this by fishing the fluff out with a pin or nit comb but sometimes the little tiny hooks on the hook-and-loop get damaged and then the tape needs to be replaced.  Nappies where there is a good big bit of velcro to hold them closed (such as the TotsBots range of nappies) are better than those that only have a little skinny bit.  If you're looking for second-hand Bumgenius nappies, I'd advise going for the snap fastening type, unless you're the practical sort and can replace the Aplix.  Kits are available to replace the Aplix and elastics on Bumgenius nappies.

Some styles of nappies have been unchanged for ages and are fairly indestructable and so make a good second-hand purchase.  I would say that most two-part nappies come into this bracket: Motherease One-Size and Sandy's nappies, Littlelamb bamboo or cotton fitted nappies, Easy-Peasy nappies, Nature Babies fitted nappies, Bambinex and TotsBots Bamboozles, for example.  And of course prefolds and terry squares should be absolutely fine second-hand as there's nothing to wear out.  Team up old and well-used nappies with nice new wraps and you'll be fine!

There are some brands of nappies that seem to change all the time and so it can be hard to work out exactly what it is you're buying.  One of the trickiest in this respect is the TotsBots Easyfit all-in-one nappy which seems to have had 5 incarnations, all of which look very much the same from the outside, but are quite different inside.  In some versions of the Easyfit nappy, the absorbent part is made of cotton, in some it's microfibre and in some it's a mix of bamboo and microfibre.  In the latest version, the Easyfit Star, the absorbent part is made mostly of bamboo rayon plus some microfibre and this is a very absorbent and neat fitting nappy.  Version 4, however, contained a much higher proportion of microfibre and so was much bulkier and less absorbent.  Version 3 was, I think, entirely made of microfibre which made it very quick to dry but it had a reputation for limited absorbency and compression leaks.  Version 1 and 2 were better liked by users but would definitely be showing their age by now.  The leg elastics have also changed on the Easyfit and are much improved on the new Star.  TotsBots Easyfit Star nappies have been around for more than 4 years now so they are beginning to come up second hand - but I have seen people selling version 3 or 4 on Ebay, describing them as Stars.  The Easyfits in my trial kits are Easyfit Star nappies.  If you have borrowed a trial kit and really liked this nappy and want to buy some, take great care to make sure you're getting the right thing if you buy them second-hand - or you may be very disappointed.  Now that I am closing The Nappy Shed, I am selling some preloved Easyfit Stars that are still in great condition.

Before buying used nappies, make sure that they really are the bargain they seem to be.  Littlelamb nappies are very reasonably priced when new so should be really cheap second-hand.  Nappies that have already done a couple of babies should be very cheap.  Nappies that haven't been used but have been stored for ages may not be as good a buy as they seem.

I am closing The Nappy Shed this spring and so have some nappies for sale in The Nappy Shed Shop section that are preloved.  These nappies used to be in my trial kits and newborn hire kits.  They are nearly all current versions and they are clean, unstained and very serviceable nappies - still waterproof and with good elastics - some are nearly new, . 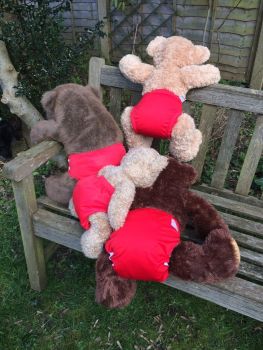