Disposable nappies are filling up UK landfill sites at a staggering rate of 8 million nappies a day and they make up 3-4% of household rubbish.  400,000 tonnes of disposable nappies go into the rubbish in the UK every year.  By the time they reach two and a half, an average child will have used approximately 5,000 nappies, which equates to almost a ton of waste per child.

Oxford is going over to incinerating all its rubbish.  Whilst this is better than putting it all in landfill, as the heat from burning rubbish is used to generate electricity, it still generates a lot of greenhouse gases, and the ash formed contains toxins from the plastic and gel in disposable nappies.  And the rubbish has to be carried in a truck from your home to the incinerator, costing the council a lot of money.

If you use cloth nappies instead of disposables all the time, and are sensible about how you wash and dry them, you can make a 40% saving in your carbon footprint. If cloth nappies are washed as recommended by the manufacturers at 40o- 60oC and dried on the washing line or on an airer, the energy used in laundering them is quite small - less than the energy used to make a disposable nappy - much less than the energy it takes to make, ship and dispose of a disposable nappy.  And with modern washing machines, the amount of water used to launder them is not huge - in fact, it takes less water to wash nappies than it does to make the wood pulp and cotton wool that go into a disposable.  There is no need to soak them in nasty chemicals – modern washing machines and detergents are so good the nappies will come up lovely and clean.  Any residual staining can be bleached by hanging them out in the sun. 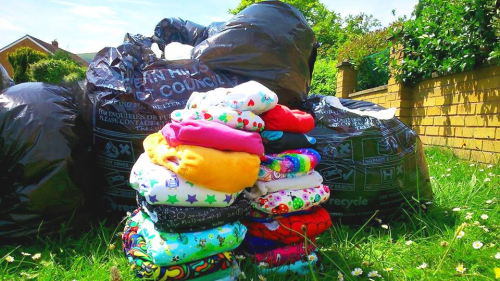 Depending on which brand you choose, disposable nappies can cost as much as 30p each.  This means you could easily spend £35 a month (or more) on disposables, or over £1000 by the time your child reaches two and a half.  For £300 (or less) you can buy a complete set of nappies that will see your child through the whole of the nappy-wearing period and, at the end of this, the nappies should still be fine to be used on another baby.  Modern nappies are cleverly designed so they can be adjusted to fit any size of baby – except perhaps the tiniest newborns.

Washing and drying cloth nappies is not expensive.  Wash them warm and spin them fast.  The best place to dry them is outside on a washing line but most will dry overnight if hung up in a well-ventilated room.  If the cotton or bamboo parts are not completely dry by the next day, you can finish drying them next to a radiator or in the tumble dryer.

Cloth nappies are highly absorbent and have really good elastic round the legs and the waist, giving better containment and fewer leakages than disposables, especially when the baby is entirely milk fed.  This means there’s less washing of clothes and bedding, so cloth nappies don’t make for as much extra washing as you’d think.

Modern cloth nappies are made of lovely soft stretchy fluffy fabrics – usually a combination of bamboo rayon and microfibre for amazing absorbency - plus a stay-dry microfleece lining which wicks the moisture away from baby’s skin.   This is much softer on a baby’s bottom than paper and most mums say their babies get less nappy rash using cloth nappies than with disposables.

To keep the wetness in the nappy there is an outer cover of breathable waterproof fabric –  a clever technological material that lets air and water vapour pass through but not liquid (like Gore-Tex).  This allows for some evaporation which has a cooling effect in hot weather and is more comfortable than the plastic used in disposables.  The fact that cloth nappies are cooler than disposables may prove to be especially significant for boy babies. The high temperatures reached inside a disposable nappy (up to 1oC higher than normal body temperature) may be damaging to the development of the testes and so affect future sperm production and fertility.  There was a lot of fuss about this in the newspapers about 15 years ago but less is being said about it nowadays - maybe the disposable nappy manufacturers have enough power to have hushed it all up!

Other bonuses of cloth nappies…